What hardware is required for the construction of the Metaverse?

The Metaverse is getting a lot of attention in 2021. First, Meta’s “All In” strategy, and then other big companies such as Microsoft, Nvidia, Baidu, Tencent, ByteDance and other domestic and foreign companies’ marching and layout. Under the hype of capital, the Metaverse has become the next battleground for military strategists, and many companies are vying to eat this big cake.

Chips are the “basic food” of the Metaverse.

On November 9, 2021, NVIDIA released a major business update announcement to the market at its own global industry technology summit GTC conference, that is, NVIDIA will provide basic technologies such as chips for the Metaverse in the future. AMD, which is also engaged in the development of graphics graphics cards (GPUs), has recently begun to serve the Metaverse Trailblazers. On November 9, AMD announced that Meta (formerly Facebook) has become its business partner. In the future, Meta will purchase AMD chips to meet the huge demand for data centers and computing power after Meta has transformed from a “social media” company to a “Metaverse” company. need.

The construction of the Metaverse requires enormous computing power, and chips can provide support for this. “We are in a period of high-performance computing explosion, which is also driving the need for more computing to support the services and devices that affect every aspect of our lives,” said AMD CEO Su Zifeng on November 9. “

The rise of VR/AR products will also drive the development of the most core components, chips, and the demand for chips will only increase. Similar to car chips, today’s VR/AR chips have emerged from the mobile phone and become independent and customized.

Previously, due to the niche of VR/AR products, few technology companies designed special chips for them. For example, in 2018, Oculus and Xiaomi jointly launched the VR all-in-one product Oculus Go (domestic called Xiaomi VR all-in-one), which uses the Snapdragon 821, the flagship mobile platform processor chip launched by Qualcomm in 2016. In addition, the screen of the Oculus Rift DK2 in 2014 uses the screen of the Samsung Galaxy Note 3. It can be seen that in the early days, VR/AR hardware mainly relied on the supply chain related to mobile phones.

However, with the expansion of this market, the industrial chain around VR/AR products will also have the opportunity to flourish, especially chips. In 2018, Qualcomm also released the XR 1 chip, a chip designed for VR/AR products. Today’s popular Oculus Quest 2 uses the Qualcomm XR2 chip (the second generation of the XR 1). The big sales of Oculus Quest 2 also prompted Qualcomm to gradually make efforts in the VR/AR industry chain. It is rumored that Qualcomm has set up a special department and a team to continue to design chips for VR / AR devices after the success of XR2.

On the other hand, industry giants like Apple, Meta, Magic Leap, etc. are likely to continue in the direction of self-development and customization. According to foreign media reports, Apple has completed the design of VR/AR chips in 2020, and commissioned TSMC to produce chips with a 5nm advanced process. From Qualcomm to Apple, they have devoted their efforts to the core field of chips. It is foreseeable that the chips of VR/AR products will usher in a period of accelerated development. As this market continues to expand, more players will enter the game in the future. The Metaverse will drive the vigorous development of the chip industry, and the vigorous development of the Metaverse also requires the strong support of chips.

Meta, the “All in” Metaverse, earlier launched its Oculus lineup. The Oculus Quest 2 launched in 2020 has been rated as the most worthwhile virtual reality device by many well-known technology websites. And its price is only $299, with a resolution of 1832×1920 per pair of glasses (roughly equivalent to 4K high-definition). The Oculus Quest 2 is arguably the most affordable virtual reality device available today. 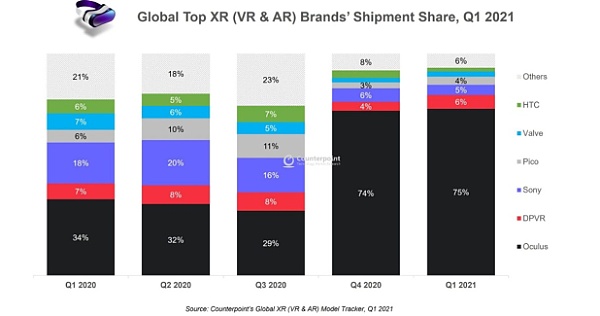 The launch of the Oculus Quest 2 also helped Meta capture more than 75% of the market (shipments in Q1 2021).

In fact, in addition to Meta, Microsoft also has its own virtual reality device called HoloLens. It has now been iterated to the second generation. HoloLens, is a pair of mixed reality smart glasses developed and manufactured by Microsoft. The second-generation product is priced at $3,500, which is a certain gap from Meta’s Oculus Quest 2 in terms of price/performance.

Now there are rumors that Apple is also actively working on a virtual reality device, which is expected to launch in 2022.Apple, which is good at combining software and hardware, is bound to be a formidable opponent when it enters this field in the future. In May 2021, Apple also acquired virtual reality company NextVR for $100 million to enhance its VR capabilities in entertainment and sports. 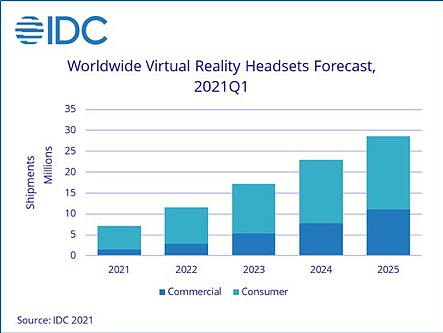 As the most important hardware for showing the Metaverse to people, virtual reality equipment will have a full development in the market in the future.

Behind cloud computing is more data center construction. The Metaverse uploads the programs that need to be calculated to the cloud, and then passes through powerful data processing, and finally transmits it back to the client. A more powerful data center means faster processing power, which will greatly improve the texture and smoothness of the Metaverse.

After the instructions have been conveyed, the next step is the modeling part of the Metaverse. All objects, buildings, etc. in the Metaverse are virtualized. NVIDIA once interspersed a few seconds of “fake” Huang Renxun and the background in its online GTC conference, requiring more than 30 staff to scan Huang Renxun using RTX ray tracing technology, and take thousands of Huang Renxun and kitchen photos from various angles. The “kitchen” is modeled in Omniverse, a virtual collaboration platform developed by NVIDIA, and finally combined with AI to make the fake look real. Just building a kitchen requires a lot of data to generate and simulate, let alone a world. If you want to build a realistic and huge Metaverse world, you need powerful cloud technology to support powerful simulation capabilities.

Many technology companies are also actively deploying related facilities. For example, Unity recently launched the “Unity Cloud Distributed Computing Solution”. According to Unity’s official statement, this solution can save up to 70% of computing time. While improving the overall computing efficiency, it also reduces the loss of local computing resources and greatly saves costs.

Previous Oculus headsets (like the Oculus Go) were basically paired with a smartphone to render and compute their worlds, making them heavy, hot, and less graphic than what a PC or console could offer many. Although the latest Oculus Quest 2 does not need to be connected to a mobile phone, it can calculate by itself, but the texture is still rough. Obviously, it is unrealistic for the AR/VR device to fully calculate the rendering and operation of the virtual world. We can use cloud computing to send important input parameters to the cloud, and then receive output parameters. And with faster connections such as 5G, AR/VR devices will be able to render their graphics remotely, further sending the results to our AR/VR devices quickly for display, just like a display and sensor collection.

To achieve this, we need reliable latency under about 7 milliseconds and another technology called mobile edge computing. For this, we need independent 5G networks to implement this technology.

Today, the overall 5G facilities in the world are generally lagging behind. The construction of the Metaverse requires a large number of 5G connection devices, which is also the difficulty that the Metaverse has to overcome when it enters the homes of ordinary people. For the Metaverse to build successfully, it is inseparable from a mature 5G infrastructure.