Virtual reality demands anything-but-virtual hardware. Exploring the immersive, interactive worlds of today's VR games and applications takes considerable processing and graphics power. That means that, with one notable exception—the standalone Oculus Quest 2, our Editors' Choice pick for cable-free virtual reality—your VR headset must be tethered to or plugged into a high-end PC. (Yes, Sony's PlayStation VR plugs into a PlayStation instead of a PC, and an optional cable lets the Oculus Quest 2 access PC-based games and apps, but we'll get to that in a minute.)

What kind of PC do you need? Beefy gaming desktops are a common option, but not everyone has the space or the desire for a bulky tower. Being able to move your VR machine from room to room—or take it on the go, if you need to show off VR demos—is more appealing. 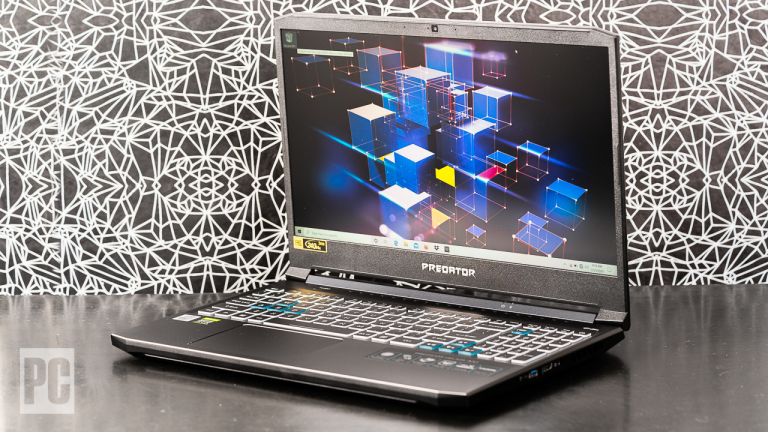 This is where a VR-ready laptop comes in. Unfortunately, the average consumer laptop is not suited to the requirements of virtual reality—chances are, it doesn't have a sufficiently potent graphics processing unit (GPU), or it has an HDMI port for an external monitor when most VR headsets dictate a DisplayPort connector instead. You'll have better odds of success with a specialized laptop designed for gamers or digital content creators. Most of all, you'll need to know what you're looking for to make sure your headset is compatible. What does it take to get virtual? We'll tell you.

What Do I Need for VR on Laptop? It's All About the GPU

Laptops that rely on their processors' integrated graphics are useless for VR applications. (Check the specs: If your laptop uses Intel's HD Graphics, UHD Graphics, Iris Graphics, or Xe Graphics, it's integrated.) Just as when shopping for a gaming laptop or a mobile workstation, your first priority must be a discrete or dedicated GPU, and a good one. Even avid gamers are often satisfied with a GPU capable of showing 60 frames per second (fps) on a laptop screen or desktop monitor, but on a headset that frame rate can at best look choppy and at worst cause nausea—a sustained 90fps is more comfortable.

The Best Laptop Deals This Week for VR*

*Deals are selected by our commerce team

You won't find those exact chips in modern gaming laptops, though; they have been succeeded. Nevertheless, our advice is to aim higher, at the very least to the neighborhood of the mobile GeForce GTX 1660 Ti on the Nvidia side and the Radeon RX 5500M for AMD-based laptops—or, better yet, a GeForce RTX or a Radeon RX 5600M/RX 6600M series solution. 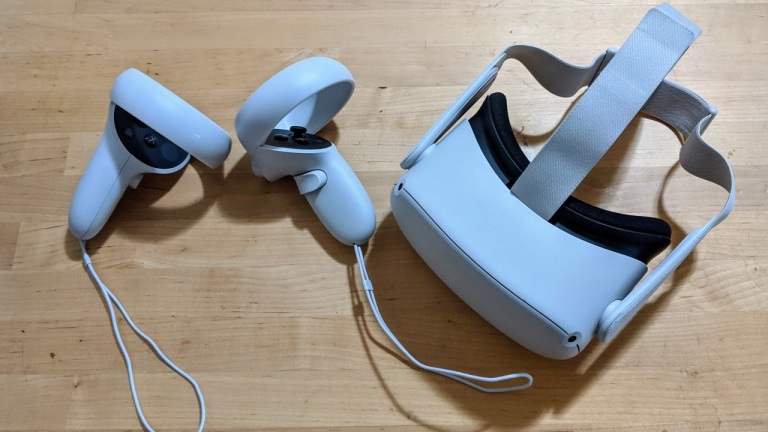 Of course, if you can spend more, you can get a truly powerful GPU. Among Nvidia's offerings, stepping up to a GeForce RTX 3070, 3080, or 3080 Ti will help you run games at much higher frame rates, even at maximum settings, which may make the difference between a dizzying experience and avoiding motion sickness altogether.

What Processor and Memory Do I Need for VR?

Outside of the graphics card, component hardware requirements for VR are somewhat easier to hit. As far as the CPU goes, the Vive Cosmos (the successor to the original Vive) says you'll be okay with a Core i5-4590 or equivalent. That's a quad-core desktop processor that Intel introduced in 2014 (and that, needless to say, you won't find in any new desktops or laptops today). The Valve Index requires a dual-core CPU as a bare minimum, but recommends four cores or more.

The same goes for the Oculus Link cable that connects an Oculus Quest 2 headset to a PC to play games like Half-Life: Alyx. The minimum for AMD CPUs is equally undemanding—the Ryzen 5 1500X, a desktop quad-core that dates back to 2017. 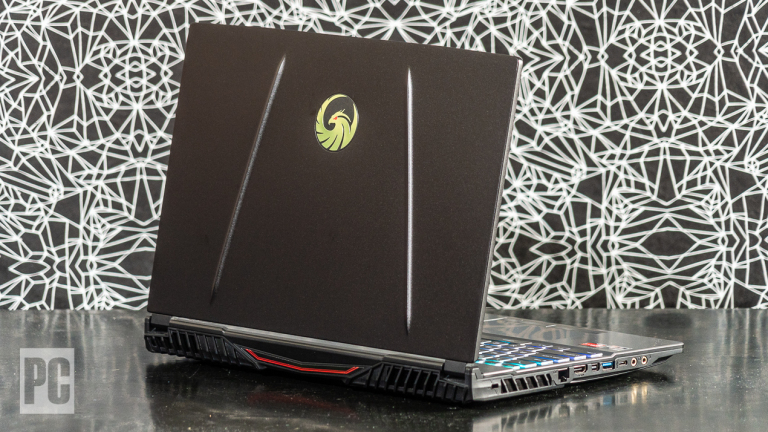 What to know when looking at CPUs: While four processing cores are really a necessity (and six or eight cores naturally better still), any modern (from 10th Generation on) Intel Core i5 laptop chips, or AMD Ryzen 5 4000 or 5000 series ones, will be fine for even the latest VR apps. A Core i7 or a Ryzen 7 will give you ample headroom for future software.

What's nice: You'd be hard-pressed to find a current- or previous-generation gaming laptop that won't meet those CPU minimums. Gaming laptops almost universally use one of Intel's or AMD's H-series CPUs, which are higher-powered processors than the U-series silicon in most thin non-gaming laptops, and a minimum of four cores. Any late-model Core i5, i7, or i9, or a Ryzen 5 or 7 H-series chip, should do the job nicely for VR. (For a much deeper dive, see our guide to understanding laptop CPUs.)

As for system memory, the Vive Cosmos asks for 4GB, while the Oculus headsets require 8GB or more. Since every current gaming laptop comes with at least 8GB of RAM and plenty offer 16GB, you won't have to go out of your way for sufficient memory or processing power, unless you're shopping for a used laptop.

Which Ports Does My Laptop Need for VR?

Modern VR headsets don't hog three USB ports as the original Oculus Rift did (it required cables for the headset, as well as two wired sensors), but you'll still need to be careful about your new laptop's selection of ports. Being able to plug in all of your headset's connectors is the main concern here, and knowing which ports you'll need requires checking the fine print. One laptop may be a good fit for one VR headset, but not have what you need for another, so make sure to check the laptop against the specific cabling needs of the VR headset you're using. 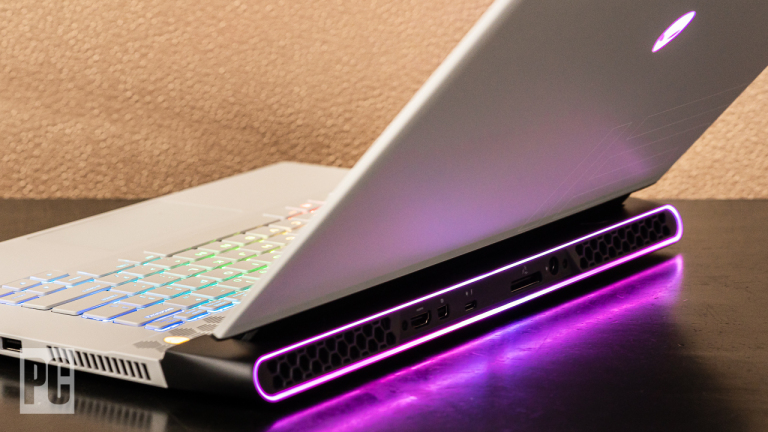 The Oculus Quest 2's optional Oculus Link is basically a fancy USB Type-C 3.2 cable, but other headsets like the Vive Cosmos and the Valve Index(Opens in a new window) require both a USB 3.0 port and a DisplayPort video connector to work with a PC. The DisplayPort is critical because some laptops, as mentioned, have an HDMI output but no DisplayPort. An adapter that links a full-size DisplayPort to a mini DisplayPort will work (and is sometimes included with the headset), but an HDMI-to-DisplayPort adapter—and this is very important to note when shopping—will not. (We haven't tried a Thunderbolt-to-DisplayPort adapter, but we wouldn't count on it. You want the "real deal" ports to match.)

Fortunately, a number of gaming laptops and some content-creation laptops do have DisplayPort connectors, but triple-checking the necessary mix of ports before you buy a laptop for VR is essential. If you have ports left over beyond what's required, you can chalk that up as a win, since it will allow you to keep other peripherals plugged in alongside the headset without swapping cables.

Other VR Laptop Concerns: The Screen, the Storage, and the Battery

After meeting the VR hardware requirements, other factors come down to your personal preferences and needs. You'll find both 15.6-inch and 17.3-inch laptops compatible with popular headsets (with some 14-inch and 16-inch models emerging), but of course you'll be wearing your headset while playing, not looking at the screen. The display size you pick should depend on how you use your laptop when you're not using VR. 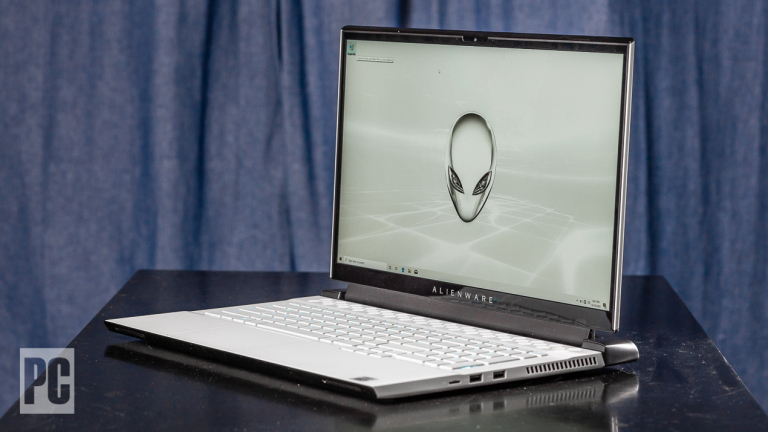 Our laptop buying guide will walk you through the pros and cons of different screen sizes. If your work is mostly confined to your desk, a 17.3-inch notebook is a plus, though some can weigh a barely luggable 8 to 10 pounds. (Also see our guide to the best 17-inch laptops, VR-ready and not.) If you'll often take your laptop on the go, a lighter 15.6-inch system makes sense. (Again, check that it has the ports you need; the more compact the machine, the fewer ports it's likely to have.) In addition to the screen size, you'll want to assess the display characteristics, notably the peak refresh rate; modern gaming laptops use panels with faster refresh rates than most older models. (See our guide to whether you really need a high-refresh screen.)

All laptops have their own visual styles, as well, ranging from businesslike bland to gamer garish. The difference is totally subjective, but you don't want to be stuck looking at something you don't like. For example, Alienware machines tend toward flashy; most Gigabyte machines look much more conservative. 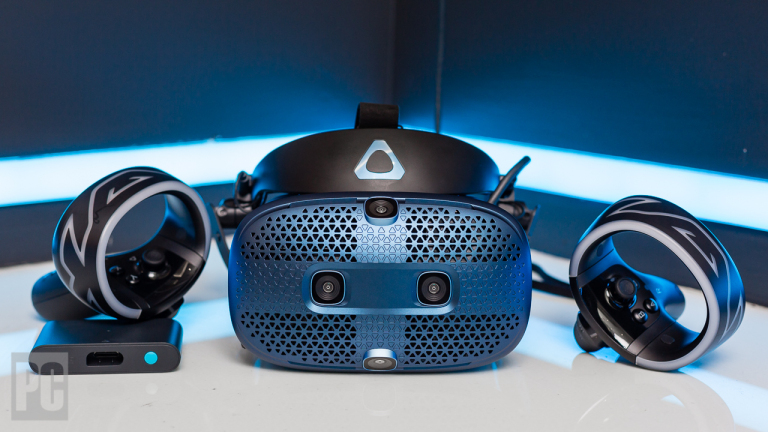 VR games and applications take up a lot of storage space, so you'll want a machine that can at least hold your favorite titles while letting you rotate others out. Teaming up a speedy solid-state drive (at least 256GB, preferably 512GB) with a 1TB or larger hard drive is a popular solution. If the laptop of your dreams has room for only one SSD without a supplemental hard drive, buy the highest-capacity SSD you can afford.

Battery life is generally less of an issue for gaming and VR laptops than for ultraportables and convertibles, because gaming laptops are usually plugged in. Playing on battery rather than AC power usually diminishes performance, and VR is so power-hungry that you'll rely on a wall outlet for all but the shortest explorations.

So, Which Laptop Should I Buy for VR?

The systems below represent the best VR-ready laptops we've reviewed. Also check out our roundups of the best gaming laptops (VR abilities aside)—or, if you decide to keep things wholly at home, the best gaming desktops, most of which can easily handle VR duties, so long as they're equipped with at least the minimum recommended GPU for the VR headset you have.